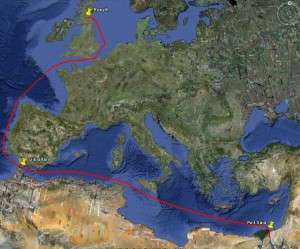 Day 14 of the transit. We reached Port said on Monday morning, and after almost 48 hours we started south through the Suez canal. Sailed under the Mubarak Peace Bridge and passed the El Ferdan Rail Bridge (the longest span swing bridge in the world according to Wikipedia – if you’re prepared to put stock in that!) We had to anchor for a couple of hours in the Great Bitter Lake that is about two thirds of the distance through the canal, but now we’re on the move again.

This site uses Akismet to reduce spam. Learn how your comment data is processed.