Ilka time I wanner in tae chynge ma library buiks, I waalk o’er the head o’ the motto o’ Buckie. For there it liggs, pickit oot in bonnie colourt stanies, on the looby fleer o’ the toonshouse. “Mare Mater”, it says; and gin I dig intae fit I can min’ o’ my Latin at e skweel, I jalouse es means “Oor Mither, the Sea” 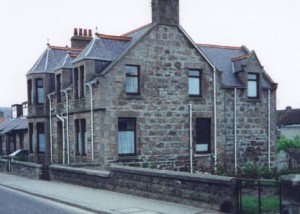 An’ richt enuch, withooten the sea and the harvest frae the deep, there wid likely nae hae been a toon o’ Buckie. An’ a’wye ye go there’s preef that the sea his lookit after us in this wee neuk o’ Scotland. Gin we were tae tak’ a waalkie ben St. Peters Road we wid see the gran’ villas biggit o’ heerin’. Nae literally, if coorse, bit the bawbees tae pey for the bonnie bow windaes cam’ frae the heerin’ boom o’ the beginnin’ o’ the 20th century. And in ither pairts o’ Buckie tae, mair o’ these gran’ hooses. They must hae been a speakalation fin they were new. Bit nae a’ the fisher fowk hid hooses like that. Na, na! ‘At wid hae been the boat-owners, the fish merchants an’ the skippers, likely enuch. 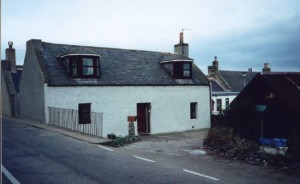 But if ye winner aboot e lads that did a’ the wark, weel, ging doon tae the Yardie, tae the Seatown, tae Hairbourheid, an’ see the wee hooses, naething funcy at a’, biggit close thegither , set wi’ their ga’le-eyn tae the sea, a’ hicketie-picketie, jist plunkit doon faur there wis a spacie. A doot there wisna’ muckle in the wey o’ toon plannin’ in those days. 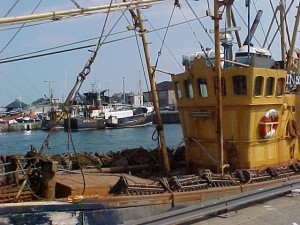 Syne look oot ower the sea, an’ maybe far on e horizon, there’ll be an ile-rig, on its slow traivel doon the Firth. Far will it gang? Africa, America, a’ o’er the wardle, loons frae here tchauve tae bring ashore the black gowd. The North Sea fields are noo mair nor 30 year auld, and still wirth a fyow barrels yet! And the sea a’ roon the wardle’s still gi’en a livin’ ta Buckie fowk. Och, aye, oor mither the sea.

But tak’ a wee traivel doon tae the midst o’ the toon. And on a neuk, quate an’ peacefu’, wi’ bonnie stained gless windaes, ye’ll fin’ a canny wee buildin’. Spare a tochtie till it, as ye ging by, or ging in an’ say a wird tae the Lord, for that was biggit wi’ tears an’ hert-brak, wi’ hope an’ faith. For es is the Fishermen’s memorial. 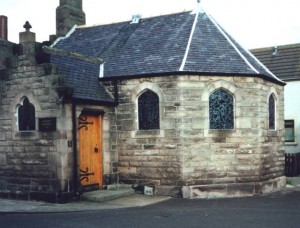 An’ gin’ ye’re ivver in Aiberdeen, gang ye tae the park aside the River Dee, and there, among the peace an’ quate, cut aff frae the bustle o’ the toon, ye can see the Piper Alpha monument, wi’ its ile-men there tae remind us. A’thing maun be peyed for, ae wye or anither. An’ files fan I ging intae the library, an’ pass the bonnie motto on the fleer, I think tae masel’, Fit kin’ o’ a mither swallies up her bairns?

Every time I wander in to change my library books, I walk over the head of the motto of Buckie. For there it lies, picked out in bonny coloured stones, on the lobby floor of the townshouse. “Mare Mater”, it say; and if I dig into what I can remember of my Latin at the school, I guess it means “Our Mother, the Sea”

And right enough, without the sea and the harvest from the deep, there would likely not have been a town of Buckie. And everywhere you go there’s proof that the sea has looked after us in the little corner of Scotland. If we were to take a small walk through St. Peters Road we would see the grand villas built out of herring. Not literally, of course, but the pennies to pay for the bonny bow windows came from the herring boom of the beginning of the 20th century. And in other parts of Buckie too, more of these grand houses. There must have been speculation when they were new. But not all fisher folk had houses like that. No, no! These would have been the boat-owners, the fish merchants, and the skippers, likely enough. But if you wonder about the boys that did all the work, well, go down to the yardie, to the seatown, to harbourhead, and see the little houses, nothing fancy at all, built close together, set with their gable-ends to the sea, all higglty-pigglty, just plomked down where there was a small space. I doubt there wasn’t much in the way of town planning in those days.

But it wasn’t just long ago that the fishing was big business here. I our time, too, a great piece of ground was all built over with council houses, and so many women from one street worked at the fish, that the children called that road “kipper alley”. And speaking about names, what about Seld Street, here in the town. A little street with no houses in it at all! But a seld is a kind of herring, so that’s another link in the chain.

If you want more evidence of the maternal sea, stroll along side the harbour. Pass the scampi place. Hold your nose if you’re the fussy kind. Is it not a funny thing that things that make money often have a stink about them! Distilleries and coal mines are two other concerns that would have you holding a hanky over you nose at times!

In time look out over the sea and maybe far on the horizon, there will be an oil-rig, on its slow travel down the firth. Where will it go? Africa, America, all over the world, boys from here struggle to bring ashore the black gold. The North sea fields are now more than 30 years old, and still worth a few barrels yet! And the sea all round the world is still giving a living to Buckie folk. Oh yes, Our mother, the sea.

But take a small walk down to the middle of the town. And on a corner, quiet and peaceful, with bonny stained glass windows, you will find a nice little building. Spare a thought to it, as you go past, or go in and say a word to the Lord, for that was built with tears and heart-break, with hope and faith. For this is the Fishermans Memorial. And if you’re ever in Aberdeen, go you to the park beside the River Dee, and there, amongst the peace and quiet, cut off from the bustle of the town, you can see the Piper Alpha monument, with it’s oil-men there to remind us. Everything must be paid for, one way or another. And sometimes when I go into the library, and pass the bonny motto on the floor, I think to myself, what kind of a mother swallows up her children?